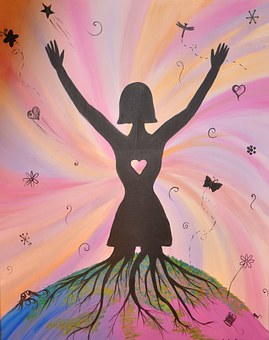 I think it is safe to say that I love EMPOWERMENT and you’ll be surprised when you look around you how many things you can spot that will give you empowerment.

Music, TV, a film, a Podcast, nature or a video. I get empowerment from people and the one person who inspires me is Tony Robbins, who I discovered some years ago, when I was fed up and needed some words of wisdom.

This man had me transfixed within minutes because it was like he had just by watching his videos had got it to my head and saw the anxiety, stress I was feeling.

He now has a new book out called: Unshakable Your Financial Freedom Playbook.

This comes with a 30 day trial see link below:

I think we could all do with a some financial support at the moment, as jobs are affect by the International Lockdown.

The other people who inspire me is Oprah Winfrey, Jordan Paige, Debra Meadon, Mel Robbins and Paul McKenna as they all have inspiring stories.

I like people who are up front and honest, because they will tell me if I look bad or something not right.

Please remember you can keep up to date with all my blogs by following me on WordPress.com and please let me know of people who inspire you.

Hi and welcome to another blog post where today in this post I will be talking about Building Empowerment through comedy and laughter.

I have always been into comedy and my favourite double acts were Canon and Ball, and Little and Large.

Sadly Eddie Large is no longer with us, but was a comedy genius and someone who for me was born to be a comedian. You could just see it, and will be sadly missed and my heart goes out to his friends and family.

You can keep up to date if you too are Canon and Ball fan by visiting the website below, where you’ll find dates to see other comedians aswell, such as Bradley Walsh, Bobby Davro,  Jimmy Tarbuck and more.

Empowerment to me means being given energy to succeed in life and comedy for me just does that for me along with music, which I have talked about in other blogs.

My favourite sketch for Canon and Ball was when they impersonated West Side story, it makes me laugh every time. Check it out in the video below:

With comedy you have to have good chemistry especially being a doubled act and with the audience aswell, and for me Canon and Ball did that, along with Little and Large.

This is why Morecombe and Wise were so good too, because they were exactly the same, but I remember them from watching their work later on in my life, and they too brought a smile to my face and made me laugh.

Comedy is pure entertainment and can instantly make you feel good, when having a bad day.

Who can forget Laurel and hardy and Norman Wisdom? They did comical films rather than shows, and pure comedy legends in my book, along with Bob Monkhouse and Ken Dodd.

With comedy comes endorphins and with that in turn works wonders and when you feel down in the dumps why not use comedy as medicine too, which in turn is empowering.

Who can beat a sitcom?

I love a good sitcom and the ones I have watched continuously are Only Fools and Horses, Friends, Not Going Out, Vicar of Dibley, The Royal Family, Goodnight Sweetheart Mrs Browns Boys and Dads Army.

The characterization is brilliant, along with the writing and the directing. The facial expressions are tremendous and Characters like Trigger played by Roger Lloyd Pack was comedy sitcom acting at its best, because he looked like his characters name. He suited the character Trigger and he played the character so well.

That for me is empowering, because the story of Only Fools and Horses written by John Sullivan, was really a sad story, because it is based on two brothers Del Boy and Rodney, and because their father left them and their mother had died, Rodney was brought by his kid brother, and all Del Boy dreams of is becoming a millionaire.

If you think about it I know in myself I have little Del Boy in me, as I think everyone wants the same success. No it isn’t about the money as such, but it helps. All Del Boy really wanted was to be a success, so looking at comedy that is what its based upon.

I wrote a similar blog to this on my Google Blogpost called Using Laughter as the best sauce of medicine I talk about Steptoe and Son, which again is very funny, a bit more ruder because there is bad language but it still well written and is based again on a sad story.

That is why I enjoy writing and would like to write comedy because it makes me smile and makes my readers smile too.

I have created a fictional blog called The West London Girl based on a woman who is a stand up comedian living in West London, and was born and brought up there.

So if you do need inspiration and empowerment then why not download if you sky Boxsets, Smart TV or Now TV Box download a good comedy which in turn will make you laugh out loud and forget about the bad you have had or if you self Isolating.

Let me know what comedy and comedians you like that you feel has empowered you. You can leave a comment below and remember to follow me if you would like to be alerted of my posts, by following me on WordPress.com